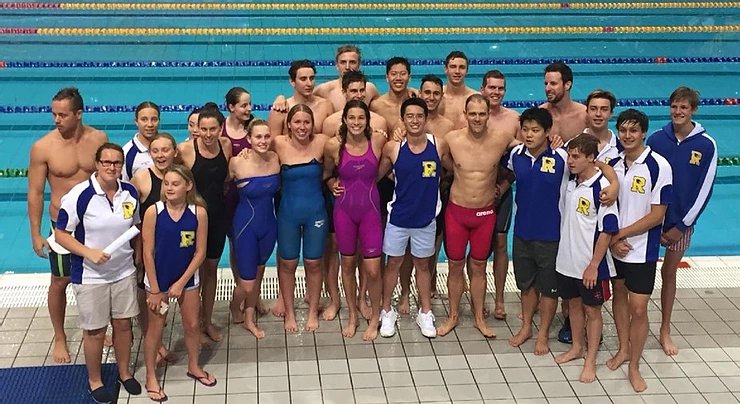 After 6 days of competition our team results summary was 11 Silver Medals & 4 Bronze Medals plus 11 other top 10 placings.

The NSW State Age 13-18 Yrs Championships kicked off on 15 December 2018. The first day of racing wrapped up with some sensational racing during the morning heats, swimmers smashing personal best times and progressing through to the evening finals. With a showdown in the men’s 17-18 50m Free between Jack, Lewis and Andrew; Jack came away with the Silver, Andrew 4th and Lewis 7th, all 3 boys going sub 23 as well as Jack and Andrew picking up the qualifying time for Commonwealth Games trials. Jack was back racing along with Olivia in the men’s and women’s 400m Free, both picking up Silver. The evening finished with our 16 and under girls medley relay team of Jemima, Grace, Chloe S and Eli picking up 7th place.

Day 2 of 13-18 State produced another great morning of personal best times, well executed race plans and positions gained for finals swims. Ned picked up his National Age time in the 200 back in the morning heats, going faster again to claim the Silver medal in the final. Lewis had a cracking race in his 100 Back final to pick up our second Silver of the night.

Our 16 years 50 Free swimmers carried on from our stunning 50 Free’s the night before; Braden, George and Jemima having sensational races in the morning heats. George came back in the evening with a zero breath race plan to storm home for the Bronze medal. Chloe S executed her race plan to post a PB and claim a spot in the final of the 100 Fly, with nerves to contend with Chloe stepped up to claim 5th place in the final.

After posting her National Age time for the 100 Breast in the morning, Grace came back in the final to not only go another 2 seconds faster, but post a Commonwealth Games Trials qualifying time and win the Bronze medal. The night was capped off with the girls 14 and under and boys 18 and under Freestyle relays. The girls were up first in the 50 Free relay; Eli led them off to post her first ever National Age qualifying time, and Chloe, Nikita and Ash posted their best ever relay splits, to earn a team best time. TJ, Josh, Keegan and Braden combined to post a team best time in their 100 Free relay; meanwhile in the same relay event, Jack, Lewis, Andrew and George had an exciting battle right to the end of their race to win the Silver Medal. Special mention to the cheer squad who came with signs to cheer our Ravens on, your support was fantastic!

Day 3 brought the halfway point for our Ravens at 13-18 State Age Championships. Olivia, Jack and Lewis charged into the final of the 200m Free; a fast finishing Olivia picked up the Silver in her final; meanwhile, Jack and Lewis both produced personal best times to pick up Silver and 8th respectively. Jemima had a sensational heat swim in her 100m Back to gain herself a finals swim, coming back in the evening to go faster again and claim 10th position. Our evening finished with some exciting racing in the girls relay events, our 16 and under Girl’s just missing out on 10th place with a sensation team effort to record a team best time by over 2 seconds.

Day 4 at 13-18 State brought another day of great racing for our Ravens. During the heats session our swimmers showed great determination and race plan execution to again produce personal best times, with Andrew gaining finals for the 100m Fly and 200m IM. After going a best time in the morning for his 100m Fly, Andrew came back in the evening to go faster again and claim 6th place. In the 200m IM Andrew had a sensational race, producing a 1 and a half second PB to pick up 2 spots from qualifying to claim 8th place. The evening finished with the boys relay; this time, Jack, Andrew, George and Lewis combining for the 4x200 Free relay. Lewis had a sensational last leg, chasing down 2nd place, to just run out of water claiming the Bronze medal.

With one day to go at the 13-18 State Age, day 5 produced another heats session of superb swimming, personal best times still coming and finals spots earned. Lewis had a solid heat swim to earn his spot in the final of the 200m Back; meanwhile, Ned picked up his National Age time in qualifying for the final of the 100m Back. Both boys stepped it for the finals, going faster again; Lewis claiming the Silver medal (after a successful appeal against disqualification!) and Ned getting home for 4th place.

Day 6 is complete, and with that comes the end of the 2017 NSW State Age Champs. Ravenswood had another successful day at the pool, starting in the morning heats. Even after 5 long days of racing our Ravens showed their determination, stepping up to produce more personal best times, well executed race plans; with Jack, Lewis and Andrew earning themselves spots in the final of the 100m Free. The 3 boys stepped up in the evening, all going faster than their morning swims, for Jack to claim the Bronze medal, Lewis 4th place and Andrew 9th place.

Before the excitement of the 10x50m Free relays, our 18 and under boys Medley relay teams produced more outstanding racing, with the team of Josh, Lewis, Andrew & Jack picking up another Silver medal. Our meet finished with exciting 10x50m relays for both the boys & girls. Lily, Alicia, Jemima, Olivia, Millie, Chole, Eli, Lucy, Grace & Clare combined for a team best time in placing 4th in the girls event; meanwhile the boys team of James, Nick, Elliot, Mitch, Alex, Jack, Tom, Andrew, George & Lewis had an exciting race to claim 2nd position.

After the 6 days of competition our team results were 11 Silver medals, 4 Bronze medals, 4x Fourth place, 1 x Fifth place, 1 x Sixth place, 1 x Seventh place, 2 x Eighth place, 1 x Ninth place & 1 x Tenth place. Thank you to all the parents that helped out with the time keeping duties and to everyone that came out to support the team.