Results From The Australian Age Championships 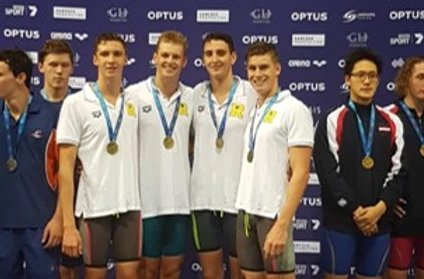 Thirteen of our Ravens are lining up against Australia's top Age Group swimmers at the Australian Age Championships being held at SOPAC from 21 April to 26 April 2018. The results so far:

Personal best times for Myles, Jack & Andrew in the 50m Free, as well as Ned in the 200m Back. Jack qualified for the final of the 50m Free & claimed 8th place on the night!

Another solid morning of heats with Lewis & Myles qualifying 1st & 8th respectively for the final of the 100m Back. Lewis claimed the silver medal in the final of the 100m Back & Myles claimed 7th with a season best time - well done boys!! Lewis & Myles then combined with Andrew & Jack for the 4x100m Free relay team, demolishing the rest of the field to claim GOLD! Congratulations!

More personal best time swims in the heats for Myles in the 200m Free & Eli in the 100m Free. Myles did another PB in the final of the 200m Free to finish 8th overall. While the girls 14&U Medley Relay team of Chloe M, Gabi, Chloe S & Eli also swam a best time to claim 8th in the final! Congratulations everyone! 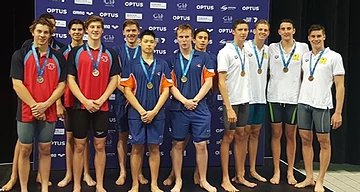 Lewis & Myles had solid races to place them in the finals of the 200M Back, of which Myles swam another personal best to claim 4th in the final with Lewis claiming 5th in the same race. Eli, Chloe S, Chloe M & Ash smashed their team personal best in the Junior Girls Free Relay to have a sensational race. Well done!

On the final morning of Australian Age our Ravens stepped up with some great racing. Eli posted a personal best in the 200m Free to rocket up the rankings, while Jack & Myles claimed their spot in the finals of the 100m Free, swimming in the final their fastest ever times (excluding relay swims) to claim 5th & 7th respectively. They then joined up with Lewis & Andrew in the Senior Boys Medley Relay to post a whopping 7 second team personal best time in claiming 4th place!! Well done boys.

Topping off a fantastic week of racing for our Ravens, Lewis & Jack as well as Mitch as team coach were named in the Australian Team for the Junior Pan Pacific Championships to be held in Fiji later in the year!! Congratulations on your selection & congratulations to the entire team for an amazing week of racing, supported tirelessly by our wonderful coaches Mitch & Leanne.